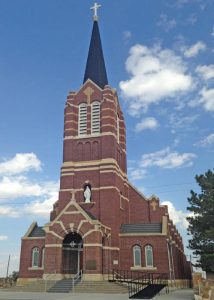 Windhorst, Kansas is an extinct town in Ford County.

In 1872, a German Catholic group was formed in Cincinnati, Ohio called the German Catholic Aurora Homestead Association. Wanting to find better opportunities and form their own town, they corresponded with a priest from Newton, Kansas. The priest then worked with a land agent from the Atchison, Topeka & Santa Fe Railroad to find available land. Before long, the railroad offered ten sections of land for $10.00 an acre at a site about ten miles southwest of Offerle, in Ford County, Kansas.

The railroad planned to extend their line to the new town and donated 80 acres for a townsite in 1877. The town was mapped out with the locations of the school, church, and cemetery in 1878. In the spring of 1879, the first Immaculate Heart of Mary Church and parish buildings were completed. The church was blessed on Easter Sunday by Father Ferdinand Wolf, the Benedictine priest who came to minister to the spiritual needs of Windhorst in May 1878.

Though the village was settled, the promised Santa Fe Railroad leg from Offerle was never constructed, and as a result, a business district never developed. However, a community formed around the church, school, and parish hall. The settlement gained a post office on December 15, 1898, but it closed on September 30, 1905.

In 1910 the town itself had a population of only 10 people. However, the surrounding population was much higher, and the congregation of the Immaculate Heart of Mary Church had reached some 395 members, which required a new church. Before long, work was begun on the beautiful brick church, which was dedicated on June 12, 1913. Up until July 1997, the church still served an active congregation; however, at that time, the Diocese of Dodge City was forced to close the church, due to low membership and a shortage of priests. The former congregation then established a nonprofit organization to care for the building, which is today listed on the National Register of Historic Places. The church can be visited daily and donations are much appreciated. The church is located about ten miles southeast of Spearville. Its address is 10845 131 Spur Road, Spearville, Kansas 67876.