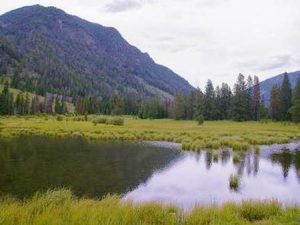 There are actually four streams in Kansas that bear the name Beaver Creek. The first flows in a southeasterly direction through Clark County and empties into the Arkansas River; the second rises in the northern part of Barton County and flows north to the Smoky Hill River; the third flows south across the western part of Smith County and empties into the Solomon River near the town of Gaylord; and the fourth and largest is composed of two forks, one of which rises in Sherman and the other in Cheyenne County. They unite near the town of Atwood, Kansas, from which point the main stream follows a northeasterly course and empties into the Republican River at Orleans, Nebraska. This last-named Beaver Creek was so named by James R. Mead’s exploring party in 1859 on account of the large number of beaver dams along its course.

During the Indian troubles in the summer of 1867, the Eighteenth Kansas Volunteer Cavalry left Fort Hays on August 20th for the headwaters of the Solomon and Republican Rivers. On the evening of the 21st Captain George B. Jenness of Company C was sent out with a detachment to ascertain the cause of a light seen at some distance across the prairie. He found the remains of an old Indian campfire, but when he attempted to return to his regiment, he became confused in the darkness, and finally decided to camp on the open prairie. Early the next morning he reached the river, about eight miles below the camp. 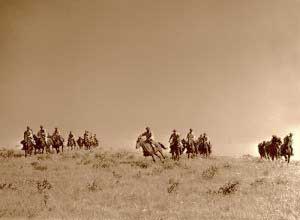 Upon reaching the river he pushed on toward the troops, but after going about three miles his detachment was attacked by a large body of Indians. Forming a hollow square, he managed to hold the Indians at bay. His men were armed with Spencer repeating carbines and each man carried 200 rounds of ammunition, so they were well equipped for a heroic defense. After a short skirmish Captain Jenness again began to move up the river toward the camp, but after going about ½ mile, saw more Indians. He then returned to the river and threw up a breastwork of driftwood and loose stones, behind which his little band fought valiantly for three hours.

All the horses except four were either killed or wounded; two of the men were killed and 12 seriously wounded. The detachment withdrew to a ravine, where they found water and remained under cover of the willows and banks of the ravine until dark. The Indians then drew off and Jenness and his men, under the guidance of a scout, followed a buffalo path for 5 miles until they came to the river. The Indians renewed the attack the next morning, but the main command came to Jenness’ rescue. This affair is known as the Battle of Beaver Creek. The event was said to have occurred on Prairie Dog Creek in the northwestern part of Phillips County.