Cadmus, Kansas is a ghost town located in the north-central part of Linn County on Elm Creek. 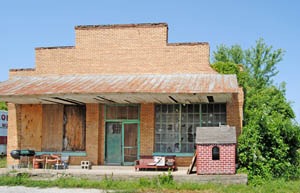 This small agricultural community got its start when the Cadmus Grange #350, a fraternal organization for American farmers, was organized in July 1873. A grange building, still stands in Cadmus, though it is unknown when it was built.

The small town gained a post office on July 6, 1877, with J.S. Payne appointed as its first Postmaster. Apparently, the town was never incorporated.

The post office closed its doors forever on November 15, 1902, at which time the small community received its mail from Fontana.

An old store, with its windows, shattered also still stands. Two miles north of the old town is the Elm Grove Cemetery. Here, can be found a Granite Memorial dedicated in 1919 to the Veterans of the Civil War, Spanish-American War, and World War I. A few area homes are scattered through the area. 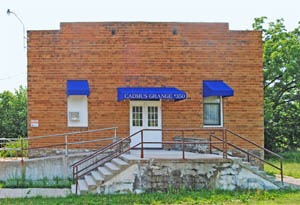 The old town is located on Highway 7 about nine miles west of LaCygne.