The reservoir was built and is managed by the U.S. Bureau of Reclamation for irrigation, area water supply, and flood control. It also serves visitors with recreation opportunities, and Cedar Bluff State Park is located on its shore.

The severe drought of the 1930s and early 1940s in western Kansas focused national attention on the plight of area farmers, who depended entirely on dry farming. This created the demand for irrigation projects and new sources for municipal water supplies. In response, the U.S. Bureau of Reclamation began investigating the Smoky Hill River basin in 1941 to determine what would be feasible, but the outbreak of World War II halted the effort.

The Cedar Bluff Unit was authorized by the Flood Control Act of 1944. Investigations resumed in 1946, and by the end of the year, detailed topographic surveys were complete. Plans were soon made to construct the dam, distribution systems for irrigation, flood control, fish and wildlife enhancement, recreation, and municipal and industrial uses. 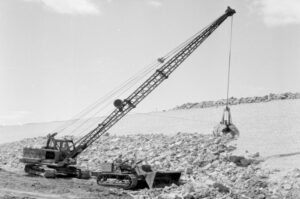 Bids were opened on February 8, 1949, and after hiring a contractor, work began on April 1, 1949. The work was completed on September 29, 1951, and filled that same year. Difficulties in organizing an irrigation district delayed the construction of a water distribution system for several years. Finally, in 1958, the Cedar Bluff Irrigation District was organized.

Construction of the 18-mile Cedar Bluff Canal began in February 1961 and was finished in July 1963. In 1959, the Bureau of Sport Fisheries and Wildlife established the Cedar Bluff National Fish Hatchery immediately east of the dam. Receiving its water from the reservoir, the hatchery raised fish to supply waters in western Kansas, eastern Colorado, Oklahoma, and Texas.

The flow of the Smoky Hill River declined sharply starting in the late 1960s, likely due to an increase in groundwater pumping and the high evaporation rate in the region. The use of the reservoir for irrigation ended in 1978, and the canal was shut down. The fish hatchery closed in 1983 and was re-purposed to raise Canada geese. The Cedar Bluff Irrigation District dissolved in 1994, and control of the portion of reservoir capacity dedicated to irrigation was transferred to the Kansas Water Office and the Kansas Department of Wildlife and Parks.

Since the end of irrigation operations, the primary use of Cedar Bluff Reservoir has been for recreation, overseen by the Kansas Department of Wildlife and Parks, and for flood control and municipal water supply, managed by the Bureau of Reclamation. 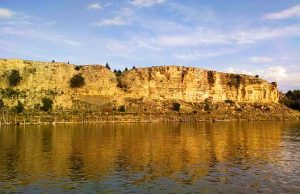 The Kansas Department of Wildlife, Parks, and Tourism manages 9,300 acres of land around the reservoir as the Cedar Bluff Wildlife Area. The department also operates the 850-acre Cedar Bluff State Park located on the reservoir’s eastern end. The park is divided into the 350-acre Bluffton Area on the north shore and the 500-acre Page Creek Area on the south shore.

The Bluffton Area is the most developed and provides a variety of facilities, including two boat ramps, 96 utility campsites, two community shelters, a reservable group utility campground, two large shower houses and dump stations; five modern rental cabins, and numerous undesignated primitive campsites and picnic areas. Visitors also enjoy sand volleyball, horseshoes, shoreside basketball, bicycling, and swimming on the beach. Fishing can be fantastic in the Bluffton area also. Nearly all of the shoreline is accessible, and there’s a covered, handicap-accessible fishing dock.

On the south shore of the reservoir, the Page Creek Area is not quite as developed but provides some of the finest primitive camping in the state with its large shade trees and sandy shorelines. The Page Creek Area contains 36 utility campsites, a community shelter, two dump stations, two boat ramps, two shower houses, two vault toilets, and a primitive campground. This area is a favorite for boaters, jet skiers, and for those who seek a little more solitude when relaxing outdoors. 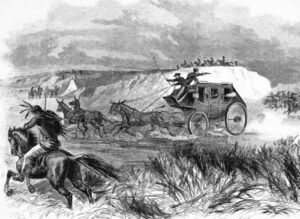 Attack on the Butterfield Overland Despatch.

Cedar Bluff Reservoir is open for sport fishing year-round. Hunting is permitted on the public land around the reservoir, although it is restricted in certain areas.

West of the park is Threshing Machine Canyon, the site of an 1867 American Indian attack on a wagon train carrying a threshing machine. It was the site of a station on Butterfield’s Overland Despatch on the Smoky Hill Trail, called Bluffton Station. Many of the inscriptions were carved by the “Pike’s Peakers” in 1859 and U.S. cavalrymen traveling along the trail in 1865. It is accessed by a road west of the park.

Annual visitation is consistently over the 250,000 mark. 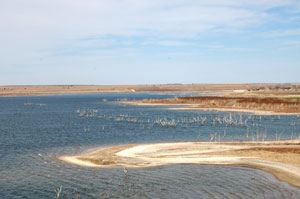 The edge of Cedar Bluff Lake by Kathy Alexander.