Clinton, Kansas, one of the early settlements of Douglas County, is an unincorporated community located on a peninsula next to Clinton Lake.

This area was first settled in June 1854 by John Beam, N. Alquire, and M. A/bin. John Beam soon established a store. Later, a Mr. Spradling, Lyman Sawyers, L.H. Boughton, and G.W. Umberger moved into the vicinity. Many more settlers followed, and within eight months, there were about 530 settlers in the area. In April 1855, Harrison Burson applied to the U.S. Government for a post office. The application was approved, and a post office called Bloomington was established on July 11, 1855, with Harrison Burson as the postmaster. It was named for a city in Illinois. 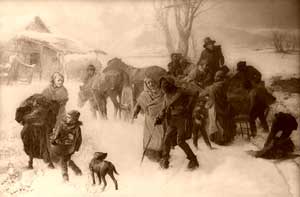 During these early years in Kansas Territory, the people of Bloomington were primarily anti-slavery and helped slaves escape through the Underground Railroad.

In August 1856, the supply route to Lawrence was cut off, and the townspeople were forced to travel to Lecompton, which was strongly pro-slavery. Henry Hiatt and several other people were taken prisoner, and 50 proslavery ruffians began marching to Bloomington. A team of 400 or 800 men marched toward Lecompton, and although a confrontation was avoided, it resulted in the looting and burning of Colonel Henry T. Titus’ home (known as the Battle of Fort Titus). Afterward, Henry Hiatt, one of those taken prisoners, moved from Bloomington and founded the town of Twin Mound. 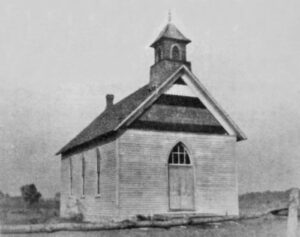 Clinton and Bloomington quickly became rivals since they were only separated by only a few miles. On August 30, 1858, Bloomington’s post office moved to Clinton with J. A. Beam as postmaster. Several other general stores had been opened and several houses erected by this time. A town hall would also be built.

The first schoolhouse in Clinton was a log cabin, the cost of which was borne equally by the district and a wealthy resident, John Beam. About the middle of the school year, a disagreement arose within the district, and Mr. Beam decided to withdraw his interest in the schoolhouse deal. In response, several young men equipped with cross-cut saws cut the schoolhouse in two and, with the aid of skids and an ox team, removed half of it from the premises. This obviously disrupted the school, and just where it was held afterward, if at all, is unknown.

In 1858, Clinton had become so prosperous that it was a prominent contestant for the county seat.

In August 1859, the trustees of the Clinton Township Company gave a warranty deed for two lots to the trustees of Clinton School District No. 25, in consideration of $100.00.

In 1863, a splinter group from William Quantrill’s raid on Lawrence rode through Bloomington but caused more damage and harm when passing through Lone Star about five miles south of Clinton. 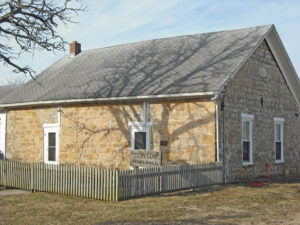 In 1865, the Clinton Presbyterian Church was built at the expense of $1,000. In May 1866, the school district recorded a deed, and plans were made to build a schoolhouse with John A. Beam again in charge. That year, it was built of native stone, and students began to attend the school.

In 1869, the Clinton Cemetery was established on land already used for a cemetery and is considered one of the oldest burial grounds in Douglas County.

The Lawrence & Emporia Railroad was built through Bloomington and Clinton in 1873.

By 1876, most of Bloomington had reverted into farmland and was considered vacated.

In 1884, the school was supposedly condemned, and a new frame structure was built in 1885. The old stone school building was then advertised for sale and sold for $150.00.

In 1894, the Lawrence & Emporia Railroad tracks were deemed redundant by larger competing railroads and abandoned. The same year, Hannah L. Alien bought the 1866 stone school. At this time, the Home Telephone Company was staffed by the Alien family.

By 1910, it was clear that the town of Clinton had not lived up to the great expectations of the early days. At that time, it had a couple of churches, a school, several stores, a blacksmith and wagon shop, a money order post office, and a population of 83. 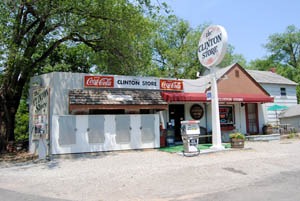 Hannah Alien continued to operate the switchboard for the telephone company until 1925.

In July 1930, Hannah Alien sold the old school building, which passed through a couple of hands before the Clinton Township Board of Directors bought it for $250.00. It then became known as the Clinton Town Hall, where all board meetings of the township and elections were held. It also served as a meeting place and for social events. The building continues to stand today and is the oldest extant school in Clinton Township. It continues to serve as a community meeting place for various organizations and has become the “culture center” for activities in the Clinton Lake Area.

In May 1941, the wood-framed Clinton School, built in 1885, burned down, along with most of the early records associated with the curriculum, students, terms, and teachers.

Starting in the mid-1960s, land was purchased for the construction of Clinton Lake, and the entire town of Bloomington was bulldozed, leaving only the J.C. Steele house and a milk shed standing. Though the house was placed on the National Register of Historic Places in 1979, it was later razed. However, the shed then became a museum near Bloomington Beach. 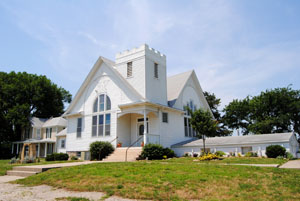 Clinton is located between Rock Creek and the Wakarusa River, about nine miles southwest of Lawrence.