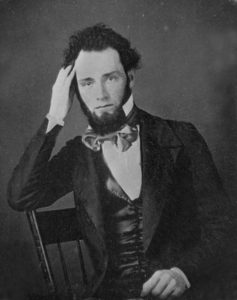 Cyrus Kurtz Holliday was a capitalist and railroad builder who made his dream come true when he established the Atchison, Topeka & Santa Fe Railway.

Holliday was born near Carlisle, Pennsylvania, on April 3, 1826, to David and Mary Kennedy Holliday. As a youth, he received a public school education before studying law at Alleghany College in Meadville, Pennsylvania. However, he soon set his mind on different business venues. His first venture was building a short railroad line in his native state, where he accumulated some $20,000. This provided the foundation of his success in later life.

He then married Mary Dillon Jones, and deeming the West a better field for exercising his peculiar talents, he left Pennsylvania and, in October 1854, settled at Lawrence, Kansas. Mary stayed behind in Pennsylvania, but the two were reunited later in Kansas after the births of their children, Lillie and Charles King. 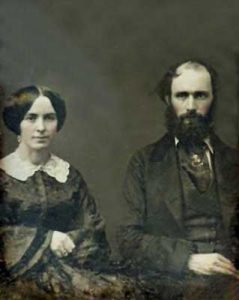 While in Lawrence,  he took an active interest in the Free-State cause, and by December, he was convinced that the territory would enter the Union as a free state. He established a new free-state settlement farther west on the Kansas River. The Topeka Town Association was formed in late December 1854, and Holliday was elected its first and only president.

In 1855 Holliday received the honorary title of Colonel for supervising a free-state regiment during the Wakarusa War. Although his Colonel title was only honorary, he continued to use it for the rest of his life.

Holliday played a principal role in founding the Free State Party, and after Topeka was established, he was also elected to the first of many terms as mayor of the new city. Holliday also helped found the Kansas Republican Party and served in territorial and state legislatures. In 1861, Holliday served in the Kansas State Senate, and on February 7, 1862, he donated 20 acres for the new state capitol building and helped design it. He also served as the Adjutant General of Kansas during the Civil War from May 2, 1864, to March 31, 1865, during which time he recruited soldiers and ensured that supplies were sent to the front. For many years, he was Topeka’s largest landowner and heaviest taxpayer. 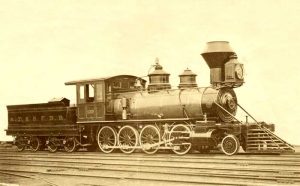 Holliday’s greatest achievement was projecting and building the first portion of the Atchison, Topeka & Santa Fe Railway. He was the first man to dream of a railway line along the old Santa Fe Trail to the Pacific coast. He secured a charter from the Kansas legislature in 1859  and, through the purchase and sale of Potawatomi Indian lands, raised money enough to build the first 20 miles of the road — from Topeka to Carbondale — an event that was celebrated with appropriate ceremonies.

In 1864 he prepared a map showing the line of the proposed road and tried to interest capitalists in the scheme. Everywhere he was met by rebuffs and sneers, but nothing daunted him, and he lived to see the realization of his dreams. 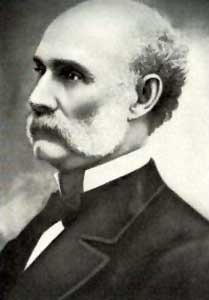 He ran for Congress as a Republican in 1874 but was defeated in that election.

Holliday had broad interests in developing the natural resources of Kansas. In the 1890s, he was mistakenly convinced that Ellis and Trego Counties in central Kansas contained mineral deposits of tin, zinc, and gold mineral deposits. In 1899 his son Charles K. Holliday founded Smoky Hill City, Kansas, near where they thought the mineral deposits could be found.

Holliday was also president of the Excelsior Coke and Gas Company and Merchants National Bank of Topeka. He also served as president of the State Historical Society and was a director of the Atchison, Topeka & Santa Fe Railroad company from the time it was organized until his death on March 29, 1900. Holliday is buried in Topeka Cemetery, Topeka, Kansas. 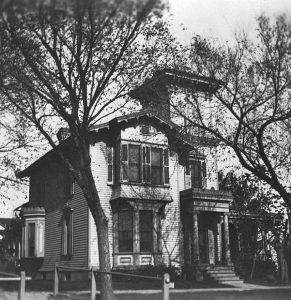 Cyrus Kurtz Holliday Home at the corner of Sixth and Monroe in Topeka, Kansas, about 1900.