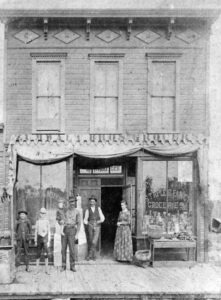 The village of Holliday, Kansas, was located in the northcentral part of Johnson County on the south bank of the Kansas River. First called Waseca, the town was platted in 1882 and received a post office on June 26, 1882. On November 3, 1885, the town’s name was changed to Holliday in honor of Cyrus K. Holliday, the railroad magnate who supervised the laying of the tracks through the area.

Situated at the junction of the Atchison, Topeka & Santa Fe Railroad lines, the town grew rapidly when the railroad came through. As many as 45 workers found employment at the depot, which also served as a fueling station for the steam locomotives.

By the turn of the 20th century, the town was also a hub for area farmers. In 1910, the town was called home to 150 people and boasted a money order post office, telegraph and express facilities, three general stores, a restaurant, blacksmith shop, barbershop, dance hall, depot, and two churches. The town also had two segregated schools – one for whites and the other for blacks. The town was never incorporated.

After World War II, railroads began to use diesel locomotives rather than steam engines, which diminished the need for fueling stations. The railroad depot closed in 1949.

In mid-July 1951, heavy rains led to the flooding of several Kansas Rivers. On July 13, 1951, the Kansas River crested, from Manhattan to Bonner Springs, at 4 to 6 feet above all previously recorded crests. The damage in June and July across eastern Kansas and Missouri exceeded $935 million, killed 24, and caused thousands to abandon their homes, schools, and businesses. It was the most significant flood destruction in Midwestern United States history. The town of Holliday was among the casualties. For nearly a month, the floodwaters cut off the town and its residents from the rest of the world. Afterward, little was rebuilt. 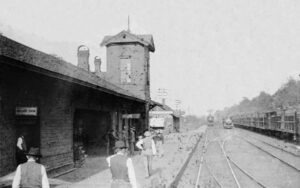 In the 1960s, Holliday’s school was closed due to consolidations. In the following years, what was left of the old town fell into disrepair, and some of the structures, including a general store, burned to the ground. The City of Shawnee annexed the area in 1968. The post office closed on September 16, 1971.

By 2002, just eight homes, standing near 50th and Locust Streets, were all that remained. That year, Deffenbaugh Industries purchased the townsite, demolished what was left of Holliday, and expanded the Johnson County Landfill. 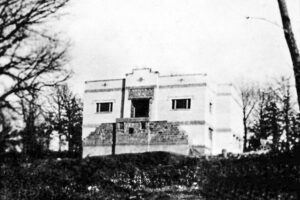 School at Holliday, Kansas about 1915.