Latimer, Kansas, got its start when the Chicago, Kansas & Nebraska Railroad planned to come through the area. 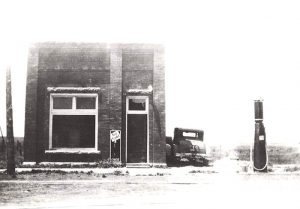 The Latimer Bank failed during the Great Depression and was later utilized as a grocery store. 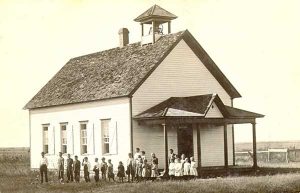 Initially, Latimer got off to a good start a soon had a bank, a lumberyard, and several other businesses in addition to the post office. However, just a year after it started, the post office closed in June 1888 but then reopened in February 1889. Then, a few years later, it happened again, closing in April 1895 and reopening in November 1895.

In the meantime, the Chicago, Kansas, and Nebraska Railway was foreclosed on in 1891 and taken over by Chicago, Rock Island & Pacific Railway.

Latimer never grew very large and by 1910 only had a population of about 14 people. The Latimer State Bank hung on until the Great Depression when it closed. The building then served as Herbert Glancy’s grocery store for a time.

The post office closed in January 1961, and a grain elevator operated until the mid-1990s. Today, a Lutheran Church is the only remaining business in Latimer, which is called home to only about 30 people. The trains that continue to come by are now operated by the Union Pacific Railroad. 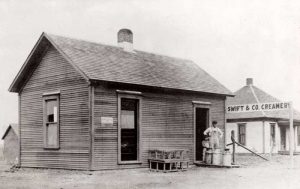 Compiled and edited by Kathy Alexander/Legends of Kansas, updated December 2021.