Medina, Kansas, in Kentucky Township of Jefferson County, is an extinct town today. It started as a settlement called Perryville in 1865 when the Kansas Pacific Railroad came through Jefferson County.

Lutt, Kunkle & Menzer bought the land, platted the town, and established a store. They were the leading owners of the Rising Sun townsite and conceived the idea of founding a new town on the new railroad line. This they did, and soon the greater portion of the old town was moved to Medina.

A two-story stone schoolhouse was built in 1865, with Mr. Gettis teaching the following year. One story was used for the school, while the other was rented to the Baptist Church.

On February 16, 1866, the post office was moved from Rising Sun with William King, who opened the second store, as postmaster. On April 16, 1866, the name was changed to Medina. The town was named at the suggestion of John Speer of Lawrence, Kansas, who had formerly lived in Medina, Ohio. During the first two years, the village grew quite rapidly.

In March 1867, Reverend S. Weaver started a newspaper called New Era. In addition to the weekly newspaper, the town boast about a dozen business establishments.

The post office briefly closed in the summer of 1867. 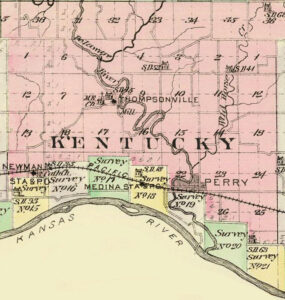 In the early 1880s, Medina was described as located in a very pleasant level valley lands of the Kansas River It was also mentioned that the town had dwindled since its beginning and several buildings had been moved away. At that time, Medina had a railroad depot, a general store, a grain elevator, a two-story schoolhouse, a few dwelling houses, and a population of about 60.

The post office closed again in September 1886 but reopened in December 1887.

However, the post office closed its doors permanently on December 14, 1901, after which its mail was supplied from Perry by rural route delivery.

Medina was located 16 miles southwest of Oskaloosa and two miles from Perry.