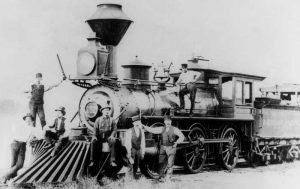 Mina, Kansas, an extinct town in Marshall County, was once a trading point between Axtell and Summerfield.

It was located on the Missouri Pacific Railroad, 20 miles northeast of Marysville. After the railroad tracks were laid in 1887, J. R. Sittler built a warehouse in 1888 and bought grain.

In 1889, W. G. Wooley and Newman Erb laid out a town and named it Mina, for the wife of J. R. Sittler. The same year, a railroad depot was built with L. Rouse, who had charge of the grain elevator, as the agent. The same year J. R. Sitler built a grain elevator and a post office was established on November 20th.  In 1890 A. C. Axtell erected a store building and L.D. Rouse erected the first residence just north of the store. A blacksmith shop was built by farmers in 1894 and a church building began being built the same year. The church was dedicated in June 1895. A schoolhouse was built in 1898.

By 1910 Mina had a population of 38. However, it did not grow and even though there was significant shipping of grain and livestock in 1917, it was called home to only 13 people but the church was still thriving an there was still a general merchandise store.

In the end, however, the railroad failed to survive, the brick depot was sold and razed, the schoolhouse was moved, and the townsite returned to the land. The post office closed on December 15, 1925.