West of Durham, Kansas, Cottonwood Crossing was one of the more famous and difficult stream crossings on the Santa Fe Trail.

The stream channel was relatively deep, with steep banks that required excavating “cut-downs” or ramps for the wagons. Double or triple teams were needed to pull the heavy wagons up the ramps. If possible, the stream was crossed immediately upon arrival so the crossing could be completed before a rainstorm might cause the creek to rise and delay the crossing, perhaps for days. 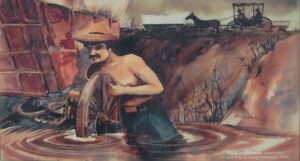 Stuck in the Mud by Doug Holdread, 1996. From Interpretive Panel.

It was also an attractive site because the horseshoe shape of the river provided large sheltered campgrounds on either side of the creek, provided trees for lumber to make wagon repairs, and was an ideal place for corralling cattle. Wagon trains usually remained in camp for an extra day to make repair equipment in preparation for continuing westward. The site was considered the “jumping-off point” for proceeding out onto the prairie, as often noted in period diaries.

Before 1857, George Smith established a road ranch just south of the crossing. It was labeled as a “hotel” on the 1857 General Land Office survey.

The Moore brothers, from Illinois, drove government ambulances from Kansas City to Santa Fe in 1858. However, after just one trip to New Mexico, they disliked the work and headed back home, crossing Kansas. At Cottonwood Crossing, they stopped and visited with George Smith, who was running the trading post, selling whiskey, canned goods, and other provisions to passing Santa Fe Trail wagon trains and travelers. The Moore brothers were interested in the business and bought it from Smith. The site then became known as Moore’s Ranch.

On his way to Pike’s Peak Goldrush in Colorado, a traveler wrote in his journal: “Almost 700 people camped on ‘Cottonwood Crick.’ Buffalo, deer, elk, and antelope grazed nearby. Moore’s Ranch is just two log cabins, one for a dwelling and one for the grocery store.

In 1858, the Journal of Commerce noted that this stop on the Santa Fe Trail was important in providing supplies, corn, hay, wood, grass, and water.

Traffic on the trail became heavy in 1859 after the Journal of Commerce published a list of stations along the trail. Between April and September 8 that year, more than 2,170 wagons and 8,000 tons of freight passed westward through unorganized Marion County. At the same time, immigrants’ wagons, returning Pike’s Peak gold seekers, and Mexican traders were headed east.

On November 14, 1860, a post office was established at Moore’s Ranch site, with A.A. Moore serving as the postmaster. At that time, the mail wagons and stagecoaches began running along the trail. 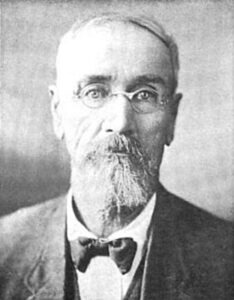 In 1861, the town of Marion was laid out, and Abraham Moore kept the ranch but moved to Marion, where he established the first store. In 1862 he married Nancy O. Waterman, and the following year, they had the first native white child in Marion County.

Upon the organization of Marion County in 1865, Moore was elected county treasurer and a state representative.

But all this activity ended in Marion County in 1866, when the Kansas Pacific Railway reached Junction City, about 40 miles north and east of Lost Spring. Beginning on July 2, 1866, the mail stages left the railhead at Junction City, traveling westward then southward, and did not join the Santa Fe Trail until a point on the Arkansas River near the mouth of Walnut Creek. The post office at Moore’s Ranch closed on November 9, 1866.

In 1867 Moore was elected to the Legislature, served in the State Senate in 1868, and was again a member of the House of Representatives in 1871.

Moore’s Ranch continued to operate until the railroad came to the area in 1872, making it obsolete.

In 1882, Albert Moore left Kansas to reside in Prescott, Arizona. 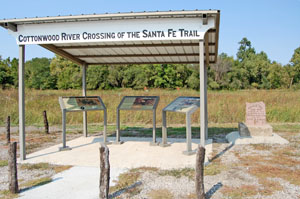 It is located on 290th Road, about 1.5 miles west of Durham. On the paved road is the site of the Cottonwood Crossing of the Santa Fe Trail. In addition to the kiosk and three historic interpretive plaques, a Daughters of the American Revolution marker is adjacent to the kiosk, and across the road to the south is a limestone Santa Fe Trail Marker. Today, all evidence of the many crossings has been erased by floodwaters and erosion. However, some excellent Santa Fe Trail swales can be seen in a meadow in the grove of trees on the hill.