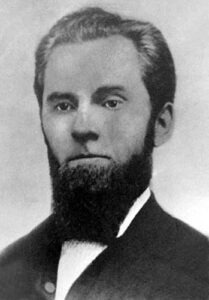 Nehemiah Green was the fourth governor of the State of Kansas.

Green was born at Grassy Point, Hardin County, Ohio on March 8, 1837. In March 1855, when he was only 18 years old, he came to Kansas with his two brothers, Lewis F. and George S., both of whom afterward served in the Kansas Legislature. They settled in the town of Palmyra (now Baldwin) in Douglas County, but the following year Nehemiah returned to Ohio and entered the Ohio Wesleyan University at Delaware, where he completed his education in 1859.

In 1860 he married Ida Leffingwell of Williamsburg, Ohio. The same year, he was made pastor of a Methodist Church and served in that capacity until 1862, when he enlisted in Company B of the Eighty-ninth Ohio Infantry during the Civil War.

Before the expiration of his term of enlistment, a serious illness in his lungs forced him to resign from his commission. On May 2, 1864, he re-entered the service as a private in Company G, One Hundred and Fifty-third Ohio Infantry. Soon, he was appointed sergeant-major and was mustered out with that rank with his regiment on September 9, 1864.

He then returned to Kansas and became pastor of a church in Manhattan. He also purchased a farm of 320 acres on Mill Creek and devoted much of his time to raising cattle for the market. In November 1866 he was nominated by the Republican State Convention for the office of Lieutenant-Governor and was elected.

Upon the resignation of Governor Samuel J. Crawford on November 4, 1868, Green succeeded to the office of governor and served for the remainder of the term. Upon the expiration of his term as governor in 1869, he returned to the ministry in Manhattan. He also served as a regent of and taught military drill tactics at, Kansas State Agricultural College. His wife Ida died in 1870, and he gave up the pulpit for a time and retired to his farm.

In 1873 he married Mary Sturdevant of Rushville, New York, and was once again working as a pastor in Holton, Kansas. In 1875 he had charge of a church at Waterville.

In 1880 he yielded to the solicitations of his friends and was elected to the state legislature and served as Speaker pro-tem of the Kansas House of Representatives until 1882.

This was his last public service. Governor Green died at Manhattan from lingering complications from his Civil War illness, on January 12, 1890. He is buried in Manhattan’s Sunset Cemetery.