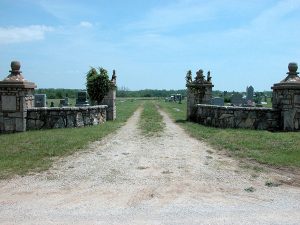 Oakwood, Kansas, once situated in the western portion of Linn County about 10 miles northwest of Mound City, is an extinct town today.

Oakwood’s post office was established on September 20, 1858, with John Jones as the first Postmaster. The post office was frequently moved from one farmhouse to another until 1878 when a grange store was started under the management of W. B. Scott and the post office was permanently moved there. In the early 1880s, the town also supported a drug store, blacksmith shop, and physician’s office.

Servicing the trains along the Missouri-Kansas-Texas Railroad for a time, it had begun to decline by the turn of the century. Its post office closed on January 31, 1905, at which time it received its mail from Centerville. In 1910, the population was 40. The Oakwood Cemetery still exists, now listed as being in Centerville.