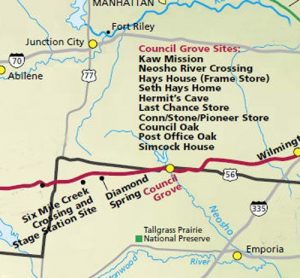 After the stagecoach station at Diamond Spring, Kansas was destroyed by Missouri Bushwhackers in 1863, another station was needed along the Santa Fe Trail. The site was called Six Mile Crossing because it was six miles from Diamond Spring.

When a post office was established here on February 9, 1863, Samuel Shaft, the station’s proprietor, was appointed the postmaster. In the fall of 1865, the station was sold for $2,000 to Frank and William Hartwell, who had come west from New Hampshire. The station consisted of a low stone building with three rooms, a log building used as a store, a stone corral, and a stable.

Six Mile Creek was just over one day’s journey from Council Grove, where the wagons adopted their four abreast defensive formations. Here was the first creek crossing after leaving Diamond Spring en route to Lost Spring and on the second day after departing Council Grove. However, Six Mile Creek posed few obstacles to wagon movement.

The Hartwells did not fair well the first year and made plans to move the Stage Line Company headquarters to Junction City and bypass Six Mile Creek Station. After the Union Pacific Railroad pushed west to Junction City, a new eastern terminus for the Santa Fe Trail was established, and the stage line stopped coming to Six Mile Creek on July 1, 1866. 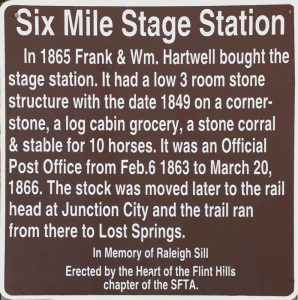 The Hartwells soon sold the station and moved to another stage station at the Cimarron Crossing, 30 miles west of Fort Dodge. Charley Owens and his wife purchased the Six Mile Creek property for $500. The post office was discontinued on October 3, 1866, but the store and other facilities remained open.

In June 1868, the Cheyenne Outbreak of Morris County occurred when the Cheyenne moved eastward to make war on the Kanza Indians. Along the way, they burned many buildings and stormed Council Grove.

Fortunately, Owens and his wife were away at the time, but afterward, the store and the facilities never reopened. In the following years, trail traffic declined as the railroad moved westward. Later, a ranching operation was headquartered at the site, and the station building served as the ranch house until after the turn of the century.

Today, the station’s site, listed on the National Register of Historic Places, features only the basement walls and some debris from the upper stories, with some trail ruts nearby. The site itself appears inaccessible, but a historical marker and sign are located about 3.2 miles northwest of Burdick, Kansas. To get there, head west on Bb Avenue toward S 2800 Road for .5 miles, turn right onto S 2800 Road for 2.6 miles. The markers are on the east side of the road in a small grove of trees. 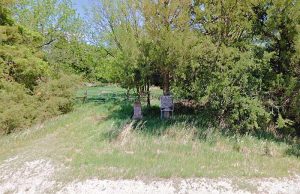