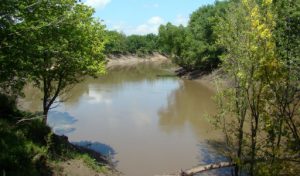 Brooklin, Kansas, once located about seven miles northwest of Boicourt, in Linn County, is an extinct town today.

This old pro-slavery settlement got its start in the fall of 1855 when E.O. Brooks & Co. built some cabins here and started a store. The name was derived from Mr. Brooks’ name and Linn, the name of the county. At this time, there was no bridge across the Marais des Cygnes River, near Brooklin’s location. So the settlers cut down a very large tree and fashioned it into a canoe for the purpose of transporting their goods across the river to the new town.

In the spring of 1856, David Sibbett opened a school, but it, along with most of the residents of the settlement was broken up and scattered, when they heard that John Brown had just committed the Pottawatomie Massacre.

Afterward, other Free State men, including Jim Lane, and others, were traveling south and killing all the pro-slavery men before them. Mr. Brooks hastened to Missouri with his stock of goods. Later, it was found that the report of men coming their way was false and some people returned to Brooklin. David Sibbett and Z. W. Leasure bought Brooks’ store goods, brought them back to Brooklin, re-opened the store. When a post office opened on January 2, 1857, David Sibbett was appointed Postmaster. However, the town never thrived and in October 1871, the post office closed. Most of the residents moved to Boicourt or La Cygne. By the early 1880s, all that was left were the remains of two blacksmith shops.