Cleburne, Kansas, one of the river towns of Riley County, was located in Swede township. It was razed when Tuttle Creek Dam was built. 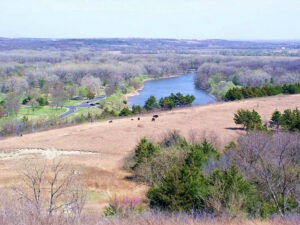 The township received its name from the creek which flows through it, and the creek was named in honor of Peter Carlson, a Scandinavian, who settled on it in 1857. In 1858, L. Pierson settled just below the mouth of Swede Creek, and N. Christenson, a Dane, settled a little farther down the Big Blue River. The same year the Meyer brothers and Frederic Toburen made a settlement in the township, and later Mr. Toburen’s parents and his brothers, Herman and Adolph.

The town of Big Timber, located on the Big Blue River, was founded in the late 1870s. Pioneer settlers were Swedish men Magnus Vilander, Peter Fernstrom, and John Palmer. In 1877, a German Evangelical Church was erected. There were three stone and two frame schoolhouses in the township.

A post office was established on December 5, 1878, with Maynus Vilander as postmaster. The settlers initially wanted to name the town after John Vilander, the first landowner of the area, but he refused.

In November 1886, the town’s name was changed to Cleburne, the superintendent of the Blue Valley Railroad John C. Cleburne, that was coming through the town. The railroad continued along the Blue River to about Blue Rapids.

High school classes were conducted in a main street store until a stone building was constructed with a gymnasium and a theater in 1907. 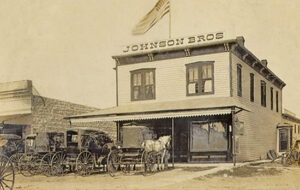 By 1910, Cleburne the Union Pacific Railroad had taken over the railroad line. At that time, the town boasted a bank, telegraph and express offices, an international money order office with one rural route, and a population of 225.

Cleburne remained a small town in the next decades. Beginning in the late 1930s, during the Great Depression, the federal government proposed building flood control dams along tributaries of major rivers in Kansas. The Flood Control Act of 1938 authorized the construction of Tuttle Creek Reservoir, which would inundate Cleburne. Though action on building the dam was slow, after a series of floods and the massive 1951 flood, the Army Corps of Engineers began the work of building the dam. Though several communities including Cleburne fought back with a “Big Dam Foolishness” campaign, they were unable to stop the dam’s construction.

Construction of the Tuttle Creek dam began in 1952. In the next years, the dam displaced 3000 people and ten towns, including Stockdale, Cleburne, Garrison Crossing, Randolph in Riley County. However, Randolph relocated and still exits today.

The railroad in Cleburne was abandoned in 1958 with the Tuttle Creek project and the Cleburne post office closed on July 31, 1960. That year the town was razed. 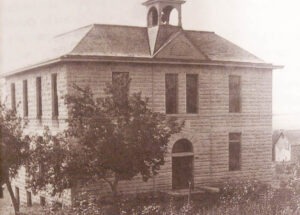 Afterward, the Cleburne townsite was turned into a park. Today, however, the park has been abandoned and is badly deteriorated.

Remains of the old town can still be seen at the side including a network of old roads, concrete sidewalks, foundations, and debris. The lake is now at least a quarter-mile away from the old town.

The townsite, located on Corps land, can be reached by taking Swede Creek Road east from U.S. Highway 77 about five miles to Bellegarde Road, then one mile east to Cleburne Park Road, then about two miles south. 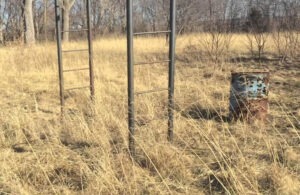