Clinton Lake is a reservoir on the southwestern edge of Lawrence, Kansas in Douglas County.

This area of the Wakarusa Valley had a history of flooding before the construction of Clinton Lake which had devastated the former towns of Belvoir, Bloomington, and Sigil in Douglas County, and Richland in Shawnee County numerous times. These were later demolished due to the dam’s construction. Thousands of acres of farmland were also covered by water as the lake filled behind the dam. 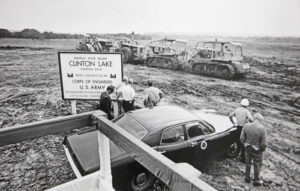 Construction of the dam and lake was authorized by the Flood Control Act of 1962. In the planning stages, area farmers were forced to sell their land to the government in the mid-1960s. Many of these displaced people referred to the project as the “damn dam” as they watched their former homes being pushed into creeks and ravines. The Corps also dug large holes, that houses and outbuildings were pushed into. Though many area residents protested and filed petitions, they were unsuccessful.

Funds were allocated for the project in 1971. Construction began in 1972, and the dam was completed in 1975. The reservoir began to be filled in November 1977 and was completed in 1980. The lake is formed mainly by the Wakarusa River coming east from Shawnee County.  After flowing through the Clinton Dam, it continues east south of Lawrence to the Kansas River near Eudora.

In April 1981, the lake began multipurpose operations including flood control, water supply, and recreation. As the water source for more than 100 000 people in the area, Clinton Lake is the most relied-on reservoir in the state. The Clinton Lake project solved the recurrent flooding in the Wakarusa Valley.

The 1,500-acre Clinton State Park lies on the north shore of Clinton Reservoir, adjacent to a 9,200-acre wildlife area. The woods surrounding the lake are abundant with whitetail deer, quail, wild turkey, doves, rabbits, and squirrels. Bald eagles, great blue heron, gulls, cormorants, and various types of migratory birds, including American white pelicans and Canada geese, can be seen at different times of the year. 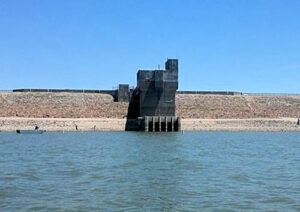 Clinton State Park also provides access to mountain biking trails, hiking, three disc golf courses, horseback riding, and hunting. The Clinton Lake Museum is located near the town of Clinton in an old milk shed that was once part of the town of Bloomington.

Park staff works closely with Lawrence and University of Kansas individuals and organizations to present several concerts and other special events each year.

Settlements along or near Clinton Lake include Clinton, Stull, and Lawrence.

The Army Corps of Engineers currently manages Clinton Lake and 15,000 acres of surrounding land in coordination with the Kansas Department of Wildlife, Parks, and Tourism. 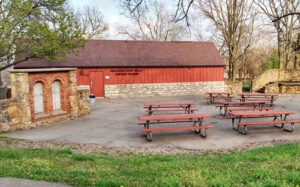