From the name of this organization, one would naturally suppose that it was formed for the purpose of promoting peace, prosperity, and good government among the people of Kansas. However, this was not the case.

“Resolved, That we hold the doctrine to be strictly true, that no man or set of men are at liberty to resist a law passed by a legislative body, legally organized, unless they choose by their actions to constitute themselves rebels and traitors, and take all the consequences that legitimately follow the failure of a revolution.”

The party and the league were formed during the turmoil known as “Bleeding Kansas,” which would determine whether the territory would become a “free” or “slave” state.

Citing criminal violence as justification to target, attack, and arrest persons associated with the Free-State cause, the Law and Order League was tasked with enforcement. 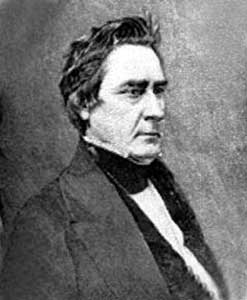 The strength of the force, variously estimated at from 500 to 1,100 men, was organized by David R. Atchison and John H. Stringfellow, whose policy was banishment or extermination of all Free-State men in the territory. Law and Order organizers drew military officers from as far away as Florida to intimidate armed abolitionists arriving from the North.

The “army” was divided into two regiments, with Atchison as Commander-in-Chief. The headquarters of the organization were at Little Santa Fe on the Missouri border, some 15 miles south of Westport. Among the outrages committed by this force was that of robbing the Quaker Mission, because the Quakers were known to assist fugitive slaves. The cattle and horses belonging to the mission were driven off, articles of value were appropriated, and for a time, the mission was broken up.

In the latter part of August 1856, the “army” was preparing for an attack upon the city of Lawrence, when the timely arrival of Governor John Geary put a stop to the proceedings. The Army of Law and Order was a part of the militia disbanded by Governor Geary, and it was never reorganized.