Manchester, Kansas, is a tiny town located in the northwest corner of Dickinson County. Though it is officially “extinct” because it no longer has a post office, it had a population of 47 as of the 2020 census. 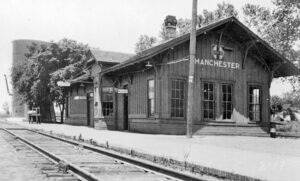 In 1887, the Atchison, Topeka & Santa Fe Railroad built a branch line from Neva, Kansas, three miles west of Strong City, through Manchester to Superior, Nebraska. In 1888, a rail line of the Chicago, Kansas, and Western Railroad opened, starting from Manchester and running 43 miles west to Barnard. In the early years, the railroad yard had a roundhouse to service steam engines, a turn-around, sidetracks, a station house, livestock pens, a company hotel, and section hand housing.

On October 28, 1889, the town’s name was changed from Keystone to Manchester.

In 1910, Manchester was an incorporated city of the third class with a population of 250. It had a bank, a weekly newspaper called the News, a hotel, several general stores, telegraph and express offices, and a money order post office with two rural routes. 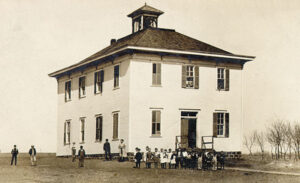 The town’s population peaked in 1920 at 263. At one point, it also had the first Ford dealership for many miles, a lumber yard, a dry goods store, a hardware store, schools, churches, and even an opera house. But, in the next decades, the population gradually fell.

Manchester is in Flora Township, 14 miles north of Abilene.