Located in what is now known as Geary County, the old townsite of Pawnee was the first official capital of the Kansas Territory in 1855.

Situated in a beautiful valley just east of Fort Riley, the Pawnee Town Association was organized in November 1854, and, immediately after its formation, the town of Pawnee was laid out. The president of the town association was also the commander of Fort Riley. Colonel James Montgomery and the chief promoter of the enterprise. William A. Hammond, the medical director for the fort, was the association’s secretary. Numerous other parties connected with the army took a conspicuous part in managing the county’s affairs, which was then known as Davis County. Other military names, including General Nathanial Lyon, Major Edmond A. Ogden, and several others, were stockholders in the Pawnee Town Association.

One of the great objectives of the people in those days was to discover the head of navigation of the Kansas River because no one doubted but that the river was navigable as far west as the confluence of the Republican and Smoky Hill Rivers. The Pawnee Town Association, thinking they had discovered the desired spot, began work on their townsite in December 1854. A levee needed to be built if this was to be the head of navigation, beyond which boats could not go, and where steamers would load and unload. The Association went to work with commendable energy and expended a great deal of time and money in its construction.

A little trouble arose over the land claimed for the townsite, as several settlers had already located there. Colonel James Montgomery, however, with a squad of men, drove the settlers off in January 1855. Governor Andrew Reeder, the first governor of the Territory, notified the Association that he would convene the first legislature at Pawnee if they had the necessary buildings completed. On March 6, 1855, the first public meeting in Pawnee was held, and among those who addressed the meeting was General Nathaniel Lyon. The meeting passed strong resolutions in favor of a Free State.

When it became known that the legislature would be convened at Pawnee, many people began to move to Pawnee, which had but two houses on the townsite. Within no time; however, construction of several hotels were begun for the accommodation of the members of the legislature and visitors, and a large warehouse, several retail businesses, and more dwellings were erected. Men were also busy erecting a stone building designed for occupancy by the legislature.

There is abundant evidence that the town was established with the knowledge and consent of the national authorities at Washington. When Governor Andrew Reeder took shares in the town company and, in May 1855, issued his proclamation for the legislature to meet there, the pro-slavery supporters were incensed. The Territorial Legislature at the time was mostly comprised of Pro-slavery supporters from Missouri who felt that placing the capital 150 miles from the Missouri border gave an advantage to the Free-State advocates in Kansas Territory. However, the proclamation stood as Governor Reeder had an economic interest in Pawnee, owning stock in the town company, land, and had recently built himself a grand log house there.

The pro-slavery advocates took their complaints to Jefferson Davis, then the Secretary of War. Davis then ordered a military survey of Fort Riley in hopes that the new town of Pawnee would be within the limits of the military reservation and could be eliminated. However, the new survey again reported One Mile Creek as the reserve’s eastern boundary. A map of this survey was prepared and sent to the department, with red lines showing where the boundaries excluded the new settlement of Pawnee. The Secretary of War, seeing the town still excluded, took a pen, drew a red line around it, and wrote on it, “Accepted with the red lines.” He then took it to the president, secured his signature, and issued orders to remove the inhabitants from that part of the reserve.

In the meantime, the territorial legislature was scheduled to convene for the first time on July 2-6, 1855. During this meeting, an unwelcome visitor had made its appearance at Fort Riley — Asiatic cholera. At that time, in addition to the garrison, quite a large number of mechanics and other workmen were employed at the Fort, among whom cholera made terrible ravages, carrying off for several days as many as one-eighth of the population. Before the disease had run its course, as many as 175 would die. The epidemic spread beyond the Fort and reached Pawnee, where eight persons died from its attacks. The first case in Pawnee occurred on July 4, with the legislature in full session. Alarmed by the epidemic and already upset about the location of the capitol, the politicians quickly passed a bill for an adjournment of the session to the Shawnee Mission in Johnson County.

Governor Reeder vetoed the bill, but the legislature overrode his veto. Before they departed, however, the legislature divided the eastern half of the state into counties, many of which were named for pro-slavery advocates, including Davis County, in which Pawnee was situated.

It and all the other counties so named would be changed years later. The legislators departed Pawnee on July 6. The territorial government reconvened in Shawnee on July 16, 1855. Pawnee’s status as the capital of Kansas had lasted precisely five days. It is believed to be the shortest-lived capital of any U.S. state or territory.

Meanwhile, Davis’ order to claim the Pawnee townsite within the boundaries of Fort Riley was issued. In September 1855, Major Cook, with about 1,000 troops, arrived at Fort Riley from Texas, charged with removing the settlers. Cook and his troops quickly began to inform the inhabitants that they must move their items or the troops would be compelled to do it for them. Some people left peaceably, but others refused to vacate, and the troops tore down their houses. Before it was said and done, only the old capitol building was spared on the old townsite. 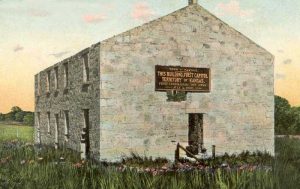 Pawnee Capital before it was restored.

After the rest of Pawnee was demolished, the former capitol building served a variety of uses, including housing, a warehouse, and a carpenter shop. In the 1920’s several civilian organizations, including the Kansas State Historical Society, the Union Pacific Railroad, and the Kansas legislature took over responsibility for the building and repaired it. It became a history museum in 1928. Today, the museum displays exhibits on Kansas Territory and the history of the old townsite of Pawnee. It is located on the Fort Riley Military Reservation, an active U.S. Army base. Entry to the base requires signing in and photo identification.