The Leavenworth & Pike’s Peak Express ran over the Parallel Road.

The Parallel Road was surveyed in 1859, when gold was discovered near Denver, Colorado. This road, which made its way across Kansas, into Nebraska, and Colorado, would be utilized by several stage lines in the following years.

When thousands of gold seekers rushed to Colorado, demand was strong for speedy and reliable mail service east and west from the mining camps scattered among the Rocky Mountains. Post offices were established at Auraria, Coraville, Denver City, and Montana City; however, there were few good mail routes to connect with the East. 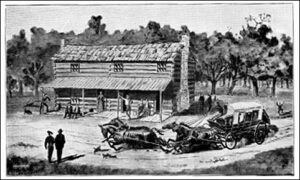 At that time, businessmen from Atchison, Kansas, sought to open a new road to the mines which would follow the 1st Standard Parallel as closely as possible. William H. Russell and John S. Jones of Leavenworth, Kansas, established the Leavenworth & Pike’s Peak Express stage line to Denver in the Spring of 1859. It followed the well-established military road to Fort Riley and then swung north and west up the Republican River to its headwaters in southern Nebraska before crossing the high plains to the head of the South Platte River. The Atchison businessmen felt that about 60 miles could be saved by a westbound road that would join the Pikes Peak Express route in Jewell County.

This new road was surveyed by E. D. Boyd, the same civil engineer employed by Jones and Russell. The first of its kind in the territory, it delivered passengers, freight, and mail. The 600-mile route was not an easy journey over barren, dry lands, often taking ten days to cover the distance.

The Leavenworth & Pike’s Peak Express service began on April 18, 1859. The first trip from Leavenworth, Kansas Territory, to Denver arrived on May 9, taking 19 days.

It followed the Fort Laramie Military Road to the crossing of Little Grasshopper Creek about seven miles south of Horton, then continued west, crossing the Grasshopper River at Muscotah and Spring Creek at New Eureka south of Netawaka. It then followed the north side of Mosquito Creek, crossed Elk Creek about a mile south of Bancroft and Soldier Creek two or three miles north of Soldier, reaching the Parallel at America City, which was founded in 1857. The town company was organized in Atchison, so this road portion already existed. The Red Vermillion River was crossed at this point, and the road continued west about ten miles, crossing Coal Creek and French Creek at Neuchatel. It then left the Parallel in a northwesterly direction to the head of Irish Creek (South Fork of the Black Vermillion), where a post office named Wyoming was established in 1862. 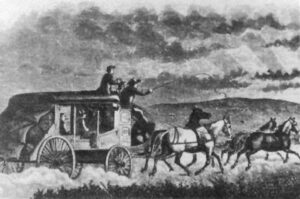 West of Big Blue River, the road continued about six miles, crossed the future townsite of Waterville, and intercepted the 1854 Mormon Trail southeast of Washington, which it followed for 12 miles. The Salt Creek crossing of the Parallel Road five miles south of Belleville was the site of the first settlement in Republic County in 1861. The Republican River was crossed near Norway, and the road continued almost due west to the crossing of Buffalo Creek at Jewell City. A. J. Davis made the first permanent settlement in Jewell County in 1869. Some 12 miles west of Davis Crossing, the road intersected the Leavenworth and Pikes Peak Express Road at the forks of Limestone Creek about four miles south of Ionia.

Several stage lines ran along portions of the Parallel Road in the next years. 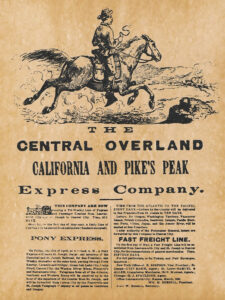 The Central Overland California and Pike’s Peak Express took over the Jones & Russell Company in February 1860. However, after a few years, the company was forced into bankruptcy and was auctioned to Ben Holladay’s Overland Mail & Express Company. This was a significant opportunity for the Stagecoach King to expand his express business into Kansas and Missouri.

Hinckley & Company Express was the fourth principal express to operate between 1860 and 1861. Hinckley & Company Express began service to the mines on May 23, 1860, connecting with Central Overland California & Pikes Peak Express Company at Denver. Transporting passengers, mail, and gold from remote mining towns in the mountains west of Denver and then east to St. Joseph, Missouri, connecting with the U.S.Post Office. The company had little competition in the remote mining areas; however, there was intense competition with the Western Stage Company and the Central Overland using the same routes east of Denver. Hinckley’s was taken over by Central Overland California & Pikes Peak Express Company in late 1861.

Between 1861 and 1866, Ben Holladay operated about 5,000 miles of stagecoaches daily, having equipment of 500 coaches and express wagons, 500 freight wagons, 5,000 horses and mules, and numerous oxen. The cost to take care of this company’s stock averaged a million dollars annually, while to equip and run the line for the first year incurred the added expense of $2,425,000. After five years of freighting, Holladay sold out his entire business to the Wells Fargo Company, which remained active until 1869 in that particular transportation line, when the Union Pacific and Central Pacific Railroads were completed. Wells Fargo & Company operated between Denver to the Overland Mail Route and railroad via LaPorte to Cheyenne, Wyoming, and mining towns west of Denver from 1862 to 1869.

Barlow & Sanderson’s Southern Overland Mail began operating in1862 in Sedalia, Missouri; as they moved west into the Kansas and Colorado Territory, they carried mail by contract for the post office to many small towns along the Front Range and into the San Luis Valley.

Though stage lines extensively used the Parallel Road, it was little used by people headed to the Colorado Gold Rush. Frank Root of the Overland Stage Company said that once laid out, the road was never used by a single Pikes Peaker. After three months, Jones and Russell moved the Pikes Peak Express to the Platte River route to take over Holladay’s mail contract, which required mail delivery at St. Joseph, Missouri. Fifty-Niners seeking a shortcut to the mines shifted their attention to the Smoky Hill Trail.

However, the road did have an impact on the settlement of the central Kansas counties which it served. Following the Civil War, Senator Samuel Pomeroy and other Atchison business leaders secured a charter for the Central Branch of the Union Pacific Railroad that closely followed the Parallel Road. One hundred miles of the rail line was authorized, and the venture was assured when the company was selected as land agent for the Kickapoo Indians when their reservation was reduced in size. During the next 25 years, more than 6,500,000 acres of land were opened for settlement. The Central Branch actively promoted land sales in Europe and the Eastern United States by offering special passenger and freight rates to land seekers.

By 1867 the Central Branch was completed to Centralia. After a hiatus of several months, a bridge was constructed across the Big Blue River at the now-extinct town of Irving, and the line was extended to the railhead at Waterville by railroad officials. For several years this was the point of departure for emigrant and stagecoach lines serving central Kansas. Waterville became a cattle town rivaling Abilene, Newton, and Wichita when Texas drovers decided to winter their herds in the area and market their stock the following Spring. An unusually severe winter in 1872 put a crimp on this practice; thousands of Texas cattle froze to death on the range, bankrupting the drovers and stranding scores of Mexican herders. In 1871 C. E. Gaylord operated a stage line from Waterville via Clyde to Concordia. The line was later extended to Beloit, Cawker City, Downs, and Gaylord in Smith County. All these towns are now on State Route No. 9. 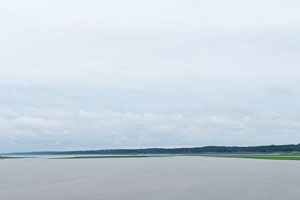 The Missouri River was bridged at Atchison in 1875, providing direct rail connections with the St. Joseph and Hannibal Railroad. This enabled the Central Branch to construct another hundred miles of rail. Downs, in eastern Osborne County, became the terminus. Atchison was a wholesale center for a vast agricultural area, although the Central Branch failed to serve any county seats on its route.

Counties west of the Big Blue River were organized after the Civil War. These settlers reached their claims by many routes, but it is noteworthy that the first settlements in Republic and Jewell Counties were made along the Parallel Road. The Central Branch also played a key role in developing the area. It subsidized settlers, many of whom shipped their possessions to the railhead and reached their claims in covered wagons.

After World War I, motor vehicles increasingly replaced rail service. One of Kansas’ first state highways followed the Central Branch west from Atchison. It was called the Kansas Whiteway until 1925 when it was designated State Route No. 9 under the Federal Highway numbering system.

The Parallel Road, long unused and forgotten, can be identified today only at widely scattered points. Cut-downs at creek crossings eroded rut swales in uncultivated fields, and local traditions passed down from pioneer settlers remain to memorialize the old trail. The road was never accorded the protective status of a Territorial Road, and settlers east of the Big Blue River soon fenced off segments and forced abandonment or relocation to section lines. 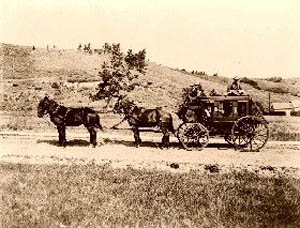 Compiled and edited by Kathy Alexander/Legends of Kansas, September 2022.