“We come with the open Bible and the open spelling book. Our purpose is to place the one upon the pulpit of a free church and the other upon the desk of a free school.”

Douglas County, Kansas, school history began with its earliest settlement. Many of the first settlers, who came from the New England states, believed that schools and churches had much to do with developing a new state. They immediately established private schools wherever there were enough children to form classes.

The first immigrant party, made up of 29 men, all New England Emigrant Aid Company members, arrived in Lawrence in August 1854. Though their primary mission was to ensure slavery would be illegal in Kansas, it was written into their original petition that immigrants coming to Kansas Territory would be provided with public education. 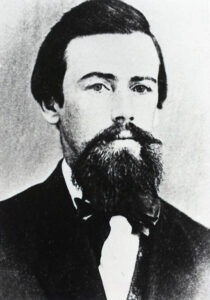 Edward Fitch was the first teacher in Lawrence, Kansas.

On January 16, 1855, just five months after their arrival, the first public classes were held with Edward P. Fitch of Hopkinton, Massachusetts, serving as the first teacher. There was no law by which taxes could be levied, so the citizens maintained the school by voluntary contributions. The first school district was founded in Lawrence in July 1855.

In March 1857, arrangements were made for regular and more extensive operations. Mr. C. L. Edwards was engaged in taking charge of the “Quincy High School,” named after Edmund Quincy, a benefactor of the New England Emigrant Aid Company. This school occupied the basement rooms of the Unitarian Church. A school building was constructed ten years later at 11th and Vermont Streets. By 1876 this high school was one of four university-accredited schools in the state.

In 1858, the citizens asked for a county superintendent, and Governor Samuel Medary appointed Dr. H. J. Canniff to the role. During the winter of 1858-59, Doctor Canniff organized five school districts, the first one at Prairie City.

In February 1859, C. L. Edwards was commissioned as the Douglas County Superintendent. He organized 35 school districts within three months and had 30 schools in session.

The first superintendents were paid $3 per day for their service. When the Territory became a State, they received a salary based upon the population; and later a fixed salary. 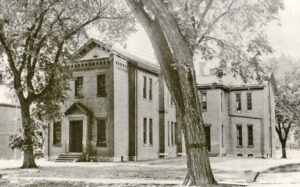 Many of the schoolhouses built in the early days were made of logs, and many kinds of rooms were rented for school purposes, but before long, the enterprising citizens began to erect substantial buildings.

In 1867, a new law was passed, constituting the board of education. It provided for a board of six members, two from each ward. At that time, there were 11 teachers and an enrollment of 889.

The next four years may be aptly called the building era. Until the erection of the high-school building, there had been very little addition made to schoolroom facilities. During this time, eight school buildings were built in north and south Lawrence.

By the 1890s, many districts were supplied with all needful apparatus, and none were without aids for the teacher. Several districts took advantage of the law, which provided that a tax could be voted to secure a library, and many soon had from 25 to 125 well-selected books. 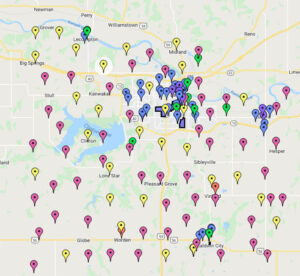 There were 84 organized districts at that time, which required 93 teachers. The estimated value of school property was $237,570, and the average daily attendance was 4,291. With a few exceptions, most were one-room buildings that served as community centers and church meeting places as well as classrooms. The county also boasted a shorthand institute, a business college, three high schools, an academy, and three universities. 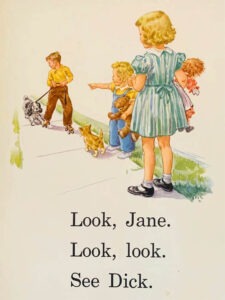 The last rural school, Twin Mound No. 32, closed its doors in 1966, more than 100 years after the first school opened.