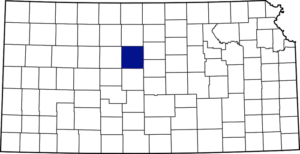 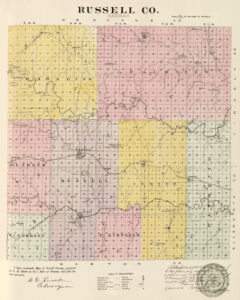 Russell County, Kansas, in the northwest part of the state, was organized on July 18, 1872, by Benjamin Pratt; and A. E. Mathews. The county was named for Captain Avra P. Russell, Second Kansas Regiment, who was killed in the Civil War at the Battle of Prairie Grove, Arkansas, in December 1862. The largest city and county seat is Russell. As of the 2020 census, the county population was 6,691.

Containing an area of 899 square miles, it is in the third tier from the Nebraska line and is the sixth county east of Colorado. It is bounded on the north by Osborne County, on the east by Lincoln and Ellsworth, on the south by Barton, and on the west by Ellis County.

The general surface of the county is rolling, and there are high bluffs along the Saline and Smoky Hill Rivers. Bottomlands average three-fourths of a mile in width and comprise 20 percent. of the area. The soil is mostly clay loam with some Benton and sandy loams. Thin belts of timber line the streams. The Saline River enters on the western border near the northwest corner, crosses east, and a little south into Lincoln County. The Smoky Hill River flows east across the southern portion. There are several creeks tributary to these two rivers. Soft and hard limestone, potter’s clay, coal, and salt were found. 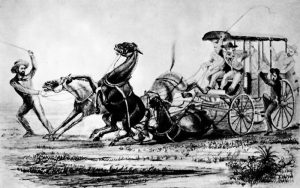 In 1865, the Butterfield Overland Despatch established several stage stations from Atchison, Kansas, to Denver, Colorado. Four stations were located in present-day Russell County. The first was Hick’s Station, 214 miles west of Atchison, then a station at Bunker Hill eight miles further, Fossil Creek Station, 15 miles further west, then the trail swung a little to the northwest, leaving the river banks before arriving at Forsythe’s Creek Station, 240 miles west of Atchison.

Fossil Creek Station was near the site of present-day Russell. In 1867, the Kansas Pacific Railroad reached the area and built its station, also named Fossil Creek, later just Fossil, north of the Butterfield station. At this time, the boundaries were first defined before a single settler existed.

In July 1869, A. E. Mathews settled near the eastern edge of the county to mine coal. Early that year, a party of seven section hands working three miles west of Fossil Creek Station were attacked by 25 Indians. The Indians were armed with native weapons, while the white men had only two guns. They tried to escape on a handcar, but two of them were killed and all but one wounded. The five were saved by a man named Cook, who came to their aid with a gun.

In 1870 several men came into the county on a hunting expedition, selected claims, and returned to their homes. That year, the population was 156, most of whom were coal miners.

In April 1871, a large colony from Green Lake, Wisconsin, settled upon the site of Fossil Station. They renamed the settlement Russell after the county. The Russell Congregational Church was founded the same year. Shortly afterward, a colony from Ohio settled east of Russell and started the town of Bunker Hill. In 1872 a colony from Pennsylvania settled near Dorrance. Up to this time, the county had been attached to Ellsworth County for judicial purposes. 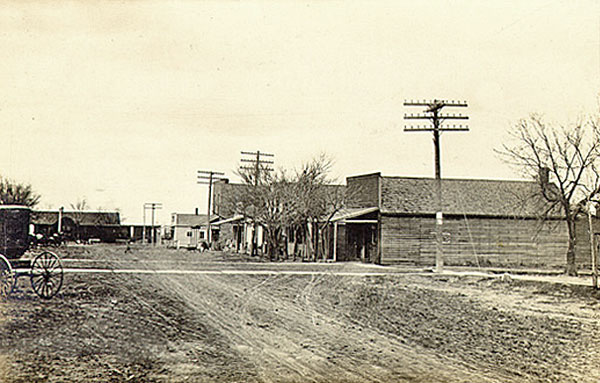 After the county seat vote, a two-year fight began between the towns. The people of Russell never admitted the change of the seat of justice to Bunker Hill, and although the records were taken there, the people of Russell and about half of the county officials, including one commissioner, considered Russell the county seat. When the time came to canvass the November election vote, this commissioner and the clerk met at Russell, and the other two commissioners met at Bunker Hill. The county was so evenly divided on the matter that half of the returns were sent to Bunker Hill to be counted and half to Russell. Neither recognized the action of the other. The matter was then taken to the courts, and after considerable delay, the supreme court decided in favor of Russell. Another county seat election was held on April 23, 1874, and Russell succeeded in getting more votes by scheming and plotting. 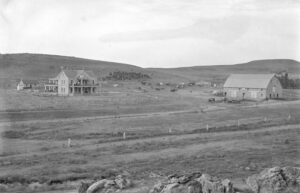 In the meantime, settlers continued to arrive, and in 1877 a large colony of Russians located about 12 miles southwest of Russell. The next year they were followed by another colony of the same nationality. The first school was taught at Russell in 1871 by Mrs. A. H. Annas. The first newspaper was the Western Kansas Plainsman, established in 1872 by A. B. Cornell. The first flour mill was built at Russell in 1875.

The early occupation of settlers was stock raising rather than farming. Up until 1880, sheep were the principal stock, and at that time, there was about 30,000 head in the county. In 1880, the county’s population had grown to 7,321. The introduction of Turkey Red Wheat into the county in 1880 greatly changed the agricultural picture for the area. Cattle were found to be more hardy and profitable, and in the next decade, they were raised more exclusively than sheep.

In July 1893, a mystery surrounded the disappearance of R. D. Dinning near Lucas. His body was not found for six months. Inquiries regarding a draft payable to Dinning and his mysterious disappearance led to an investigation and the arrest of J. G. Burton, who implicated William Gay and his son John Gay as accomplices. The three were arrested and taken to the Russell jail, where each confessed and disclosed where the body was buried. The corpse was found in a plowed field near the scene of the murder. 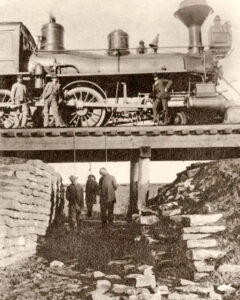 While awaiting trial, a mob of about 20 men quietly entered the jail at about 2:00 in the morning on January 14, 1894, broke off the locks with sledgehammers, and removed the accused murderers. The jail was a small wooden building surrounded by an eight-foot fence, but no officers were alerted when they took the prisoners. The three men were then marched to a small railroad bridge a short distance east of the Russell depot. After ropes were placed around the prisoners’ necks, the mob leader clapped his hands, and the men were pushed off the bridge. The three men were also shot before the mob left the scene going north.

It was not until the next morning that officers found the three men’s bodies hanging from the bridge over Fossil Creek.

In 1910, the main line of the Union Pacific Railroad passed through the center of the county from east to west. A branch of the same road entered in the east and crossed northwest into Osborne County. There were 66 organized school districts in 1910.

The discovery of oil in 1923, over 150 miles from the nearest oil-producing field, enabled Russell County to become one of the state’s leading producers. The oil boom lasted through the 1930s, attracting settlers from Oklahoma and Texas. Petroleum production became a staple of the local economy.

The county contains several interesting sites, including the Fossil Station Museum and the Gernon House in Russell, the Garden of Eden in Lucas, and the Log House in Luray. 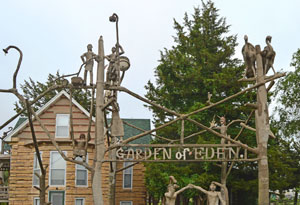 Garden on Eden in Lucas, Kansas by Kathy Alexander.